tutorials on how to make food. The power of Youtube gives us so much access to resources many teachers didn’t have in the past, it may be our best resource since…. I don’t even know what.

In this post, we share several videos and ways to use them, and also 2 iPad apps to incorporate into La Comida Unit.

This Youtube Channel we mentioned in our last post (Videos/Fotos/Chistes for the Food Unit), and today we’d liked to give some specifics on how to use La Receta de la Abuelita, with nearly 300 videos on making traditional Mexican dishes.

The first day, I showed “Receta de salsa roja“. The students watched the 1:58 minute  video. Then I handed each student a notecard and we wrote the recipe. The students summarized the steps, with some help by me with some of the cooking verbs. With the help of the video, and by summarizing, students could see that they could understand the video without understanding every single word.

The next day, we watched a video of “Salsa Caliente Habenera“. Students watched first to get the visual of what was happening, then we watched again as we filled in a cloze activity that I uploaded to wordchamp.com. Students had no trouble typing the words into the iPad, and they could check their answers and get the correct answers after so many tries (which the teacher can set). 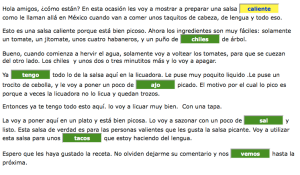 The next day we watched a video from another Youtube user, this time about making

“Agua de tuna“. Tuna is always an interesting word to teach about because students get it confused it the English word “tuna” and think we are making a drink out of “atún”.

Students were also surprised to eat that tacos can be made out of cabeza, lengua, or tripas. Some students were grossed out, but it was a good cultural lesson.

This free app features numerous recipes. I assigned students common popular Hispanic dishes such as Gazpacho, Tamales, Enchiladas Verdes, Mole Poblano, among others. In pairs, students looked up the recipe and were tasked with creating a how-to video for the recipe. In my early level Spanish class, students needed to simplify and cut the recipe down to its basic, most important steps. We didn’t worry about measurements. 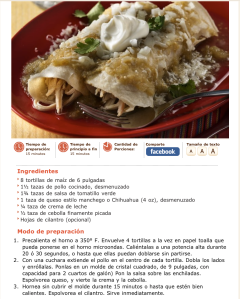 The free app, Educreations Interactive Whiteboard, allows teachers and students to record tutorial videos. [Edit: An alternative app I like even better is Explain Everything.] Working in partners, students put together a video on how to make the recipe. Students grabbed pictures of the ingredients by using Google Image Search to look up the ingredients. They then narrated (with visuals) the steps. Obviously, you can do this with any level, changing the requirements to include specific language, such as direct object pronouns, command forms, or Ir + a + infinitive.
In order to give students support, I had them sketch out their draft/script on this free Educreations Draft Map to be checked by me before they started recording. You can also check out our free Educreations App Instructions and Outline download.

Here’s an example of a finished video created in Spanish class:

For resources included in this lesson, including a student project description and rubric

for creating the tutorial video, check out this lesson on Teachers Pay Teachers.