First Days All in TL 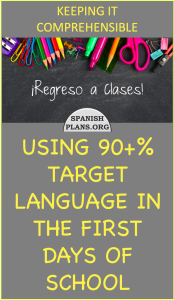 I still have the energy to type. For those of you who haven’t started school yet (or those who will read this blog in future summers) I wanted to share how I used the target language during 90%+ during the first week of school.

First, let me say that on the first day, I’m not looking to bore the students by going over the rules or the syllabus. I’m sure they get bored of that in every class. Instead, I look to get off to a running start and let them experience how my class works by doing a lesson right away.

I stand at the door and greet students and as students walk in the classroom, I have the attendance roster projected on the board so they can be sure they are in the correct classroom (We all have had that one student who showed up at the wrong period-this avoids that embarrassment). As the bell rings, I start by taking attendance. In the target language, I tell them that when I call their name, they should respond with “Sí, profe”, and I might give them an example and mimic calling a student and the student saying “sí, profe”.

For my school, our class periods are shortened on the first day, so I don’t have much time. After taking attendance, I might have about 15 minutes to start the first lesson. This year, I decided to use the commercial “Me lo compras” as a MovieTalk. This is a video that I’ve used later in the year to talk about shopping, so to use it on the first day I had to keep it really simple.

Here’s the basic structures I focused on and circled:

Like I said, I kept it very, very simple. But today was about building confidence, not

overwhelming students, and letting them see that they could understand the story even if in Spanish.

I have uploaded the student presentation along with a script for teachers, which is helpful if you are new to the tecnique of circling. Follow the script and you’ll be good to go! You can download it for FREE.

On day 2, a full day of class, I used the an adapted version of Wildebeest MovieTalk that Martina Bex has published for free.  We used the second lectura up to the point where he uses the stick. Then we looked at the text only and as a class I called on a student to translate to English one line at a time to build their confidence that yes, they do actually understand the story. Then we continued with the next version of the reading, picking up where we left off.
At the end of the story, we had the following discussion:

I asked the question and had the students respond. As they respond, I talked about how each particular strategy was a benefit or gave them an example of what I did during the story.

Hope this helps. This is certainly different than what we did a few years ago on our “Spanish from Day 1“.

Tell us in the comments, what does your typical first day consist of?

Spanish Educator, with focus on acquisition Educator Enthusiast I love learning about and sharing culture.
View all posts by SpanishPlans →
This entry was posted in Lesson Plans and tagged 90%, back to school, day 1, first day, using target languaage. Bookmark the permalink.

8 Responses to First Days All in TL