What’s the Acronym for Acquisition?

We’ve all heard them. Most of us have probably even used them at one point or another. I’m talking about those cute little songs and acronyms to memorize grammar rules, irregular forms, verbs, and more.

Example: Your students are learning about command forms. So, you give them this little trick (on right) to remember the irregular forms for positive tú commands: Ven Di Sal Haz Ten Ve Pon Sé.

Easy Peasy. Your students are going to rock out on the commands quiz.

Or how about using the tune of “Twinkle Twinkle Little Star” to memorize the irregular yo form verbs in the preterite. Sing that little tune during the quiz, and you’ll be set!

Then there are all the acronyms to remember the difference between Ser and Estar (Doctor Place), when to use the subjunctive (WEIRDO), and I’m sure they are many many more examples.

These tools may be great help to pass a quiz. But are they really that useful when it comes to acquiring a language? If your objective is for students to be able to list all the irregular yo forms in the past tense, then this is great! However, that is not a communicable goal.

Students do not take your class to learn how to conjugate verbs or to create a list of grammar concepts. They want to be able to use the language. If you can find me where in the ACTFL standards, it says that students should know all the irregular yo forms, then I’ll be happy to start practicing that song with my students. But in the meantime, I am going to give my students comprehensible input so that they hear those words used in context and eventually they internalize them and can use them in conversation.

Don’t get me wrong, my favorite lesson used to be dressing up like a doctor and pretending to be “Doctor Clift” to teach my students the differences between Ser and Estar. I thought it was great. But even after spending weeks on this “unit” I would still have a student who would write “Los tacos SOMOS deliciosos hoy”. I wanted to pull my hair out. The problem wasn’t with the students. It was with me. Ser and Estar shouldn’t be a unit. Students need to be exposed to these words in context all year long. And yeah, they are going to mix up “es” and “está” quite frequently, but you know what? They should! They are novice learners! I can not expect them to be perfect in the language they produce. But I should be darn happy if they are able to express themselves using “is” in Spanish. And eventually they will figure it out. They will use the right one, and not because they have to think “Oh, this is the E of Emotion from PLACE”, but because “está asustado” sounds right.

I haven’t taught “conjugations” in several years. My students don’t know what a “boot verb” is. They don’t know what a “go verb”. But they can communicate. They can tell me a whole story because they have the confidence! Do they use “boot verbs” and “go verbs”? You bet, but they’ve acquired them, not studied them. I am not to to stop them after their third word, and correct them: “No, make sure you use está instead of es“. I am going to listen to them and encourage them.
Why is there such a decline in numbers of Spanish students after they fulfill their 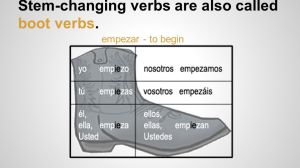 Share your opinions in the comments! Does singing the forms of a verb to “La Cucaracha” help students become proficient? Is that an acronym or trick that you use in your classroom that truly helps students? (And no, I’m not saying that they are all bad, some certainly have their merits.)

Update: Check out this post from Terry Waltz: I found this great song that teaches…

It’s fine to use mnemonics — they’re really useful for what they’re intended to do: help people remember things. Knowledge. Not to acquire language.

Spanish Educator, with focus on acquisition Educator Enthusiast I love learning about and sharing culture.
View all posts by SpanishPlans →
This entry was posted in Discussion/Methodology and tagged CI. Bookmark the permalink.

10 Responses to What’s the Acronym for Acquisition?