I love the Beatles and it was a thrill to see Paul McCartney rock out Chicago last summer at Wrigley Field. Since then, Paul has stopped at a few Hispanic countries including taking his “On the Run” tour to México.

The concert in El Zócalo was free and an estimated 250,000 people were in attendance to witness once of the greatest artists of all time. 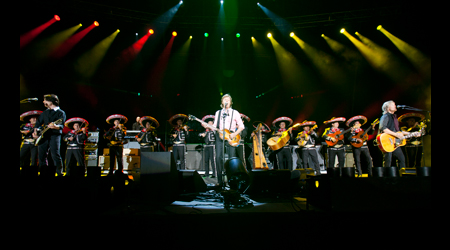 The best part: He was joined onstage by at least a dozen Mariachis for his performance of Ob-la-di Ob-la-da”:

You can hear Paul speaking Spanish in some of the videos posted on youtube. “Dedico esta canción a mi hermanito, George” and at the end of Eleanor Rigby shouted “Viva Mexico, cabrones!” to the delight of the crowd.

I mentioned last week to my students about Mexicans listening to American songs and they were shocked that they listen to songs in English. The typical reaction was “Why would you listen to something if you can’t understand it?”, which is ironic considering they love listening to music by Juanes and Jesse & Joy even though they don’t understand every word. Good thing Mexicans can “wishwashear”, which is a term used for when a Mexican sings an English song without knowing the lyrics.

The Beatles’ No. 1 fan? Mexico (English)

Spanish Teacher in Chicago. Have studied or traveled to Costa Rica, Colombia, Ecuador, Peru, Spain, Mexico, Puerto Rico, Argentina, and Uruguay. Have taught level 1 at middle and high school levels. Degree in Spanish and Master's in Teaching and Leadership. Blogger www.SpanishPlans.org
View all posts by spanishplans →
This entry was posted in Culture, Music and tagged beatles, música, mexico. Bookmark the permalink.